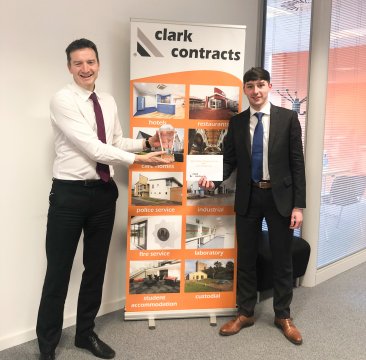 Clark Contracts has presented the top-performing student from their Academy in the 2020-2021 academic year, with the Alan Calder Memorial Prize.

From 2008 until 2019, this award was presented to the Top Final Year Student at Glasgow Caledonian University’s School of Engineering and the Built Environment annual prize-giving.

From 2020, this became an in-house award which will be presented annually to the top-performing student from the contractor’s award-wining Academy, with the winner being selected using a number of factors, including academic results, attitude to studies, university attendance and feedback from university.

The award was established in 2008 following the passing of Clark Contracts employee, Alan Calder. Alan, a Chartered Quantity Surveyor, joined Clark Contracts in 2004, as General Manager of the company’s divisions for Small Works, Insurance and Maintenance.

For the 2020-21 academic year, the prize has been awarded to Trainee Quantity Surveyor, Jack Robertson who works within Clark Contracts’ Edinburgh office. Jack joined in Clark Contracts in 2019 and completed a Modern Apprenticeship in Surveying before commencing his four-year Graduate Apprenticeship in Quantity Surveying at Edinburgh Napier University in 2020.

Gordon Cunningham, Managing Director of Clark Contracts, said: “It is always an honour to present this award in memory of our former colleague, Alan Calder, who was committed to the development of young people throughout the industry. Jack has been presented with this award for achieving the best academic results within the company, which he managed to achieve during his 1st year of university. We congratulate Jack and are looking forward to seeing him continue to develop over the coming years.”