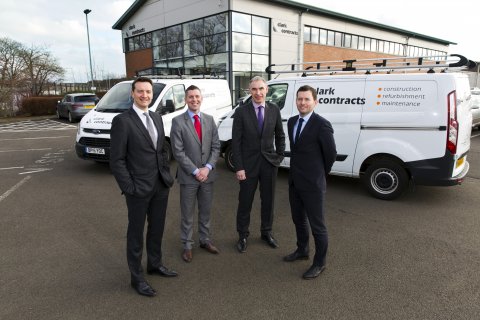 Over the last month, Clark Contracts has secured over £30m of new orders, which is a record month for the Paisley-based contractor.

The new orders include the £8m design and build of a new industrial unit within Belgrave Logistics Park in Bellshill for Knight Property Group. Clark Contracts has recently worked with Knight to deliver the £4m design and build of an industrial unit within Langlands Commercial Park, East Kilbride, and the £5m refurbishment of office space at 4-5 Lochside Avenue in Edinburgh.

Clark Contracts has also been awarded two contracts from Falkirk Council, the first of which is the £7m construction of new social housing in Polmont, which will deliver 28-units across a mixture of terraced houses and flats. The second order is for the refurbishment and extension of Maddiston Primary School.

Repeat customer, The City of Edinburgh Council, has awarded the contractor the £3m construction of the new Ratho Early Years Centre and Library, which is located less than 2 miles from Clark Contracts East office.

Further orders include the conversion of an existing hotel in Aberdeen to create a 107-bed student accommodation development, the refurbishment of retail units within Braehead Shopping Centre, roof replacement works at Lanthorn Community Education Centre for West Lothian Council and electrical upgrades within St Patrick’s Primary School in Shotts for North Lanarkshire Council.

The contractor also secured a £400k contract for the refurbishment of existing warehouse space in Irvine, for North Ayrshire Council, which will create training and demonstration space for the University of Strathclyde.

In addition to these projects, Clark Contracts has been appointed to Link Group’s Main Contractor Framework for New Build Housing, which will run for the next four years including a range of projects of varying size and tenure, including affordable housing, private rented and private sale developments.

Gordon Cunningham, Managing Director, Clark Contracts said, “It is fantastic to secure these new contracts, with both new and existing customers, which has given us a strong start to our financial year.”

Founded in 1978, Clark Contracts Ltd is a privately owned main contractor with six operating divisions; Construction, Fit Out, Small Works, Retail, Maintenance and Manufactured Joinery. The company works throughout the UK, employing over 200 employees and won the ‘Best Place to Work’ award at the UK wide Construction News Talent Awards 2019. The proportion of business derived from repeat customers each year has averaged 79% over the past five years and 72% of customers rate the contractor as ‘Impressive’ or ‘First Class’.