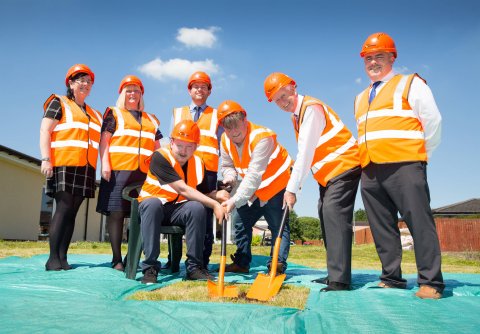 On 27th June, Eastfields, a centre for people with acquired brain injury, celebrated the start of work on a new extension by Clark Contracts with a ‘First Dig’ ceremony.

Eastfields is run by the Brain Injury Rehabilitation Trust (BIRT) which is part of national charity the Disabilities Trust, and the new build will double the number of people who can be accommodated from 12 to 24 by April 2020.

The Eastfields model of care has been very successful, and because there are few other providers of this brain injury rehabilitation model in Scotland, there is a high demand for this specialist service.

Families and friends will joined the people who are supported at the service and staff to watch Graham Anderson, former Chair of Trustees and the person for whom Graham Anderson House, the adjoining independent hospital was named, cut the first turf, with service users Ryan and Ralph and main contractor Clark Contracts.

Eastfields is a registered Care Home for Adults delivering a health and social care model of support to individuals with an acquired or traumatic brain injury. The service consists of three separate Bungalows currently providing 12 beds as follows:

Bluebell is a four bedded unit for individuals who have complex, challenging behaviour and nursing needs, who require a specialist quality long term environment. Bluebell has 24-hour nursing provision alongside a high staff to service user ratio.

Hawthorn and Thistle each have four self-contained studio flats offering individuals the opportunity to reach their full potential in regaining their independence through on-going vocational and clinical input, and psychological and behavioural management. Both bungalows offer long term placements but also provide the potential for individuals to transition into their own tenancy within the community or to return home to live with their family.

Marie McConway, Eastfields Assistant Manager, spoke about the new development: “It’s very exciting for us. Ever since Eastfields opened there has been high demand for our services and to be able to double the number of people we can support will make a real difference to many people in Scotland.”

Michael Scanlan, Director, Clark Contracts, said “We are excited to be starting on site here at Eastfields at Graham Anderson House and we are looking forward to delivering this vital project for our new customer The Disabilities Trust.”