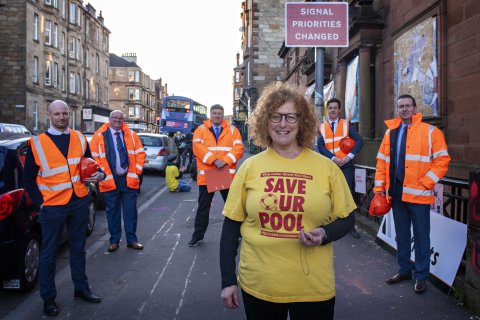 On March 22nd, Govanhill Building Preservation Trust took ownership of the Category B listed Govanhill Baths, which closed in 2001 after a lengthy community campaign that sparked the longest occupation of a civic building in British history.

The announcement comes almost 20 years to the day since protesters first occupied the building on March 21st 2001 in an attempt to prevent it from closing.  The occupation spanned 140 days and was to become one of the most effective and celebrated community protests ever mounted in Scotland.

Twenty years of determination and hard work later, and Govanhill Baths Building Preservation Trust finally has the funding in place to begin the building’s long-awaited refurbishment. Clark Contracts have been appointed and work started on the Category B-Listed Edwardian building this week.

The Community Trust formed in 2004 to raise funds to reopen the building as a community Health and Wellbeing centre. The multi-million pound refurbishment is scheduled to be completed in 15 months, restoring two of the Edwardian swimming pools, along with a new yoga studio, gym, Turkish Suite, community kitchen, cafe, and multipurpose meeting spaces.

Niall Murphy, Chair of Govanhill Baths Building Preservation Trust, said: ‘We are delighted to be taking ownership of the Baths and starting on the refurbishment works after so many years of planning, fundraising and design development. It’s great to be beginning such a fantastic community regeneration project.”

Local resident Jean Adair, who was at the centre of the occupation in 2001 and has been part of the campaign since then, said “The Baths was so important to the community and it was a big blow to us when it closed. Today is very special day for us all. Govanhill came together to save its pool, and Govanhill won – we got our Baths back!”

Alex Wilde, Director and Chair of Govanhill Baths Community Trust, said: “To be getting community ownership of the building when we are celebrating the 20th anniversary of the campaign is a significant moment for the history of Govanhill Baths and the community of Govanhill. We have fought long and hard to save this building as a community facility with many supporters, collaborators and funders making it possible. We are so excited looking ahead to next year and reopening the building as a wellbeing facility, preserved for many generations of the Govanhill community to come.”

Michael Scanlan, Director at Clark Contracts, added: “It is an honour to be involved in this iconic project, which is of great significance to the community within Govanhill. We look forward to working with Govanhill Baths Preservation Trust, Govanhill Baths Community Trust and the design team to deliver the restoration.”