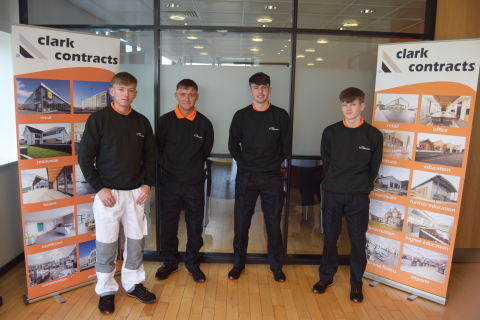 Six new trade apprentices have been recruited by Clark Contracts and will now join the contractor’s award-winning Academy.

The new recruits will complete their apprenticeships over the next four-years, alternating between on-site training and studies at college, whilst being supported by a dedicated mentor.

The intake, which includes three joinery, two painting and decorating and one plastering apprentice, will commence their studies in August, at Edinburgh College, Glasgow Clyde College, West College Scotland and South Lanarkshire College.

Four of the apprentices have now joined the Clark Contracts Academy, with the remaining two due to join later in the month.

The successful applicants were selected from over 300 applications received since launching the recruitment process with a virtual Careers Event in March.

As part of Clark Contracts rigorous selection process, a number of the applicants were invited to attend assessment sessions at the contractor’s head office in Paisley. Following this, the highest scoring applicants were invited for a first stage interview with Clark Contracts recruitment team, with a selection then asked to attend a final interview.

Gordon Cunningham, Managing Director, said, “We are delighted to be expanding our Academy again, and to have received this level of interest in our apprenticeship scheme. We look forward to seeing our new trade apprentices progress through their apprenticeships over the next four years, where they will be learning their trade at college and on site.”

Over 20% of employees are currently studying towards formal qualifications through Clark Contracts Academy, with the company making an annual investment of £750k in training.

Clark Contracts Academy has been externally recognised, having been awarded the Construction News ‘Training Excellence’ award at the UK wide awards in 2017 and being shortlisted for the same award again in 2019. The company was also named ‘Best Place to Work’ at the 2019 Construction News Awards.