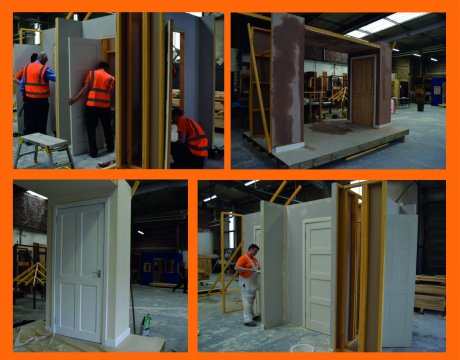 The bespoke Clark Contracts test was created by Academy Manager, David Cooper and involved our apprentices completing a timed task relating to the trade they are learning.

Five first year joinery apprentices were tasked with the erection of a stud partition, formation of a door opening, plasterboard finish, manufacture and installation of door sets including facings, door stops and ironmongery.

The four second year joinery apprentices were required to complete the same as above with the addition of a timber floor and sheet with chipboard flooring and ceiling.

Our 1st year bricklaying apprentice built a brickwork model whilst 1st year plasterer apprentice competed the plaster work to the 2nd year’s structure and following this the painter and decorator completed the decoration works.

The challenge took place at West College Scotland’s Paisley campus where the majority of apprentices are studying whilst working with Clark Contracts.

The apprentices are being mentored by colleagues who also began their careers as apprentices at Clark Contracts and have now progressed through the company’s Academy to become Site Supervisors and Site Managers.

David Cooper, Academy Manager, Clark Contracts said “It is fantastic to see how far our apprentices have progressed since starting with us and I look forward to watching them continue to improve whilst they complete their apprenticeship with us. It has been great to partner with West College Scotland to deliver this assessment and I would like to thank them for their help and continued support in training our apprentices”.

11 new apprentices have joined Clark Contracts Academy in their 2017 intake and will be beginning their college courses later this month, training to become qualified joiners, bricklayers, decorators and plasterers.